Allama Iqbal: The Bulwark against terrorism. The Counter Narrative. Who hate Iqbal and Why?

- February 21, 2016
Iqbal is bulwark against terrorism and violence faced by Muslims and the world. "The Reconstruction of Religious Thought in Islam" is s a compilation of lectures delivered by Muhammad Iqbal on Islamic philosophy and published in 1930. In Reconstruction, Iqbal called for a re-examination of the intellectual foundations of Islamic philosophy. The book is a major work of modern Islamic thought. Read more here after end of Urdu excerpts :- 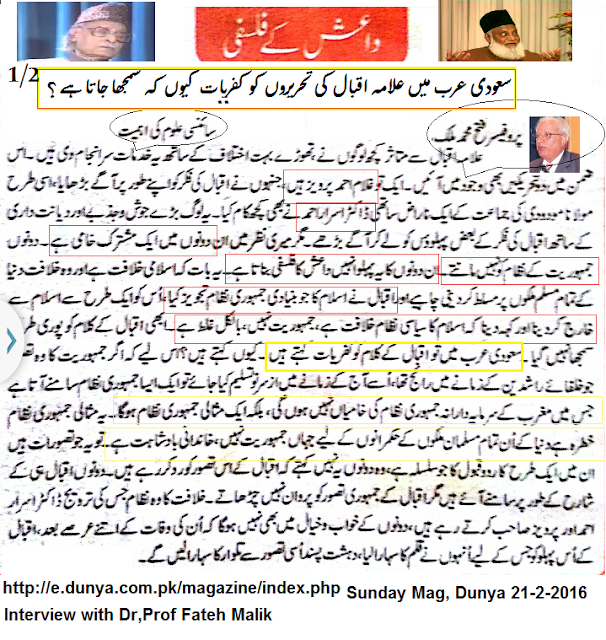 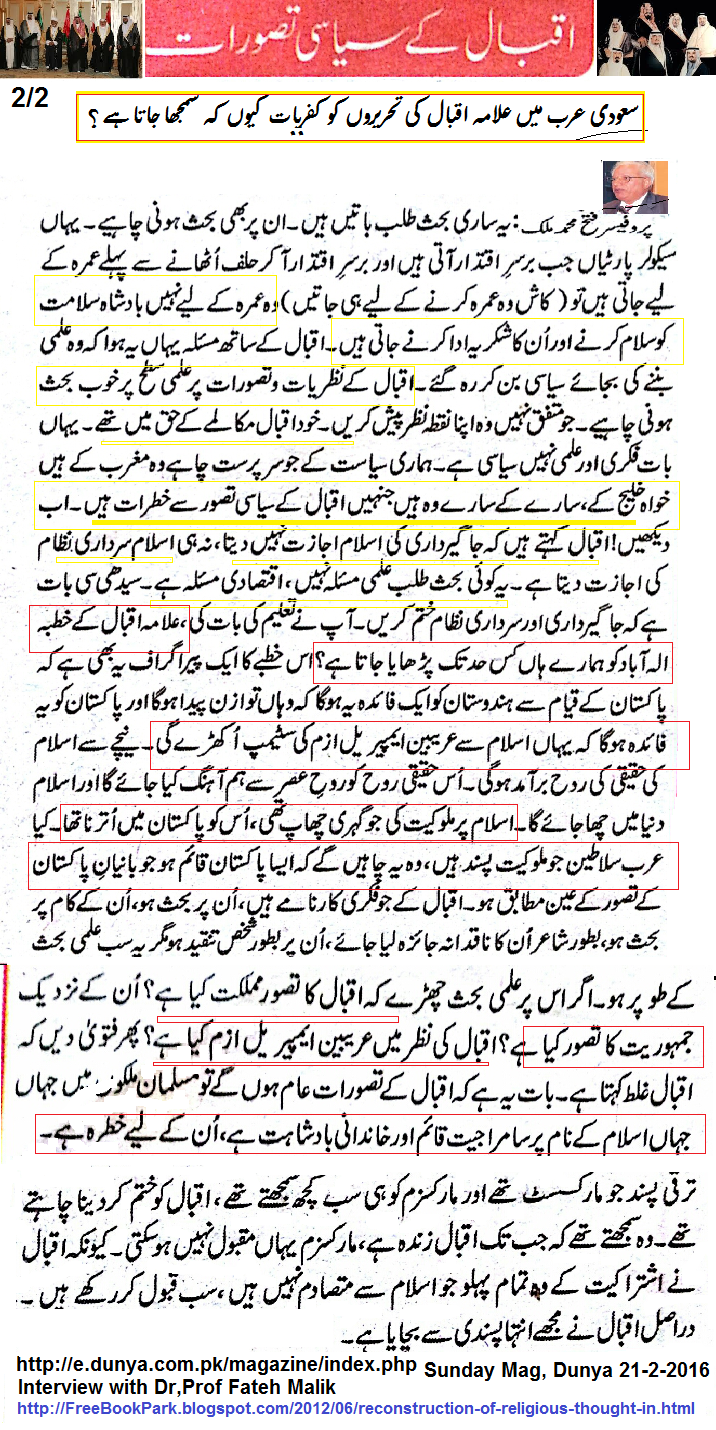 Professor Fateh Muhammad Malik, (born 1936),  a Pakistani literary critic and scholar. He has authored several books. Iqbal is his key influence and he wrote at least six books on him including his book Iqbal's "Reconstruction of Muslim Political Thought" published by University of Leicester, England. His major work while working for National Language Authority was a five-volume book on the origin of Urdu.
Malik served as the chairman of the National Language Authority. He served as Rector of the International Islamic University, Islamabad until 2012 when he was sacked by then President Zardari under pressure of from the Saudi government. Before being sacked from his post, he criticized Saudi Arabia's practices as uncivilized and anti-women during a seminar. He also served this university as a dean of the faculty of languages, literature and humanities. Before starting his career in Pakistan, he taught in Columbia University of New York, Heidelberg University and Humboldt University of Berlin, Germany, and Saint Petersburg University of Russia for ten years.
Here are his views on Iqbal and why the KSA has banned his works. The Urdu interview was published in Sunday magazine Dunya, on 21 February 2016,

"The Reconstruction of Religious Thought in Islam" and Anti Forces:

Iqbal is bulwark against terrorism and violence faced by Muslims ans the world. "The Reconstruction of Religious Thought in Islam" is s a compilation of lectures delivered by Muhammad Iqbal on Islamic philosophy and published in 1930. In Reconstruction, Iqbal called for a re-examination of the intellectual foundations of Islamic philosophy. The book is a major work of modern Islamic thought.


Iqbal was aware that the new generation of Muslims could not remain aloof from the values of modern western culture. It was therefore necessary for them to remain Muslim and at the same time to become modern.

Since this book discussed modernity in Islam, some of the Indian Ulema were quite annoyed with it. The conserves are not yet ready to accept the change that has taken place in modern life. A few years ago a seminar was held in Riyadh (Saudi Arabia) where some one asserted that his book contained nothing except heresies, and that the Muslims must not read it. However, this is an extremely important book. Some eminent Muslim scholars whom Dr.Javed Iqbal had the opportunity to meet in Istanbul, Damascus and Cairo feel that a book like this has not been written in the Islamic world for the past three hundred years, and that the importance of this book is increasing in the world of Islam with each passing day.

Subject may be called either ‘Modern Reconstruction’ or ‘Reformation’. But it is not the reconstruction of Islam or the Islamic faith, as was the movement of Martin Luther in Christianity. This is the era of Muslim cultural and ideological revival, and the book was written during this period, because Iqbal belonged to that period of the history of the subcontinent when the process of reformation had commenced even before his birth. Shah Waliullah, Syed Ahmed Shaheed, Sir Syed Ahmed Khan and Maulana Shibli Nomani were personalities who were senior to Iqbal, and had already started the process of the reconstruction of Islamic thought.

It is very interesting to note that after one thousand years of the death of Imam Ghazali, Iqbal for the first time in the modern history of Islam disclosed that there were three negative forces against which Jihad should be waged, and that only through the extermination of these forces could the new Muslim Society be brought into being. According to Iqbal, these three negative forces are:

Iqbal emphasised to do away with autocratic monarchy in Islam and to proceed towards democracy, which according to him was to return to the original purity of Islam. [How could Saudi Kingdom, combination of monarchy and orthodox Mullahism could accept Iqbal?]

According to Iqbal; the republican form of government is not only thoroughly consistent with the spirit of Islam, but has also become a necessity in view of the new forces that were set free in the world of Islam. [Saudi Arabia has a hereditary form of monarchy, with religious backup of orthodox ideology of Ibn Wahab. Hence writings of Iqbal, a modernist reformer cannot be acceptable to them. Saudis keep on changing their priorities.

Molana Maududi was the first recipient of the Saudi Arabian King Faisal International Award for his service to Islam in 1979.[After his death his Gayby Salat al-Janazah in Mecca, making him the second person in the history whose prayer was observed in the Kaaba, preceding King Ashama ibn-Abjar.

Saudi Arabia bans books of pro-Muslim Brotherhood clerics and Abul Ala Modudi in December 2015. So what was good yesterday is bad today.
In order to benefit the public at large "The Reconstruction of Religious Thought in Islam" is the antidote to the extremism and radicalisation of Muslim youth. Special permission was sought form Iqbal Academy Pakistan for publication of lectures by Iqbal in the Defence Journal. Iqbal Academy is a statutory body of the Government of Pakistan, established through the Iqbal Academy Ordinance No. XXVI of 1962, and a centre of excellence for Iqbal Studies. The aims and objectives of the Academy are to promote and disseminate the study and understanding of the works and teachings of Allama Iqbal. [http://www.iap.gov.pk]. The President of Pakistan is the patron-in-chief of the Academy under Section-8 of the .Iqbal Academy Ordinance 1962.

"The Reconstruction of Religious Thought in Islam" is an innovative book that will be of great interest to most modern day educated Muslims who are fed up with the extremist, dogmatic outlook of their religion.
In brief the four main messages of the book are :

1. This universe is dynamic and so is God. He is the Creator and is constantly busy in creation.
2. God has given man complete freedom of choice and man is not restricted by his destiny.
3. Muslims have made a big mistake by discontinuing the evolution of Islamic law and by confining themselves to four major (Sunni) schools of law. Since the world is constantly changing, we need constant evolution of Islamic law to keep pace with the world. Modern democracy can go a long way in achieving this goal and the concept of 'caliphate' can be replaced by the concept of 'republic'.[anti Daesh, ISIS, Taliban ideology]
4. Mystic religious experience is not only possible but is the only way to find the Ultimate Reality.
Iqbal understood the spirit of his time and raised new intellectual questions with the background of the basic customs of his time. Even if Iqbal had not offered answers to these questions he would have enjoyed unique eminence. But the greatness of Iqbal lies in his not leaving these questions hanging in the air and tried to provide their answers with serious thought and deep insight. These “Lectures” of Iqbal are a mirror of our national perceptions. Again, as Iqbal himself has said in the “Preface” to the “Lectures” that:
“It must, however, be remembered that there is no such thing as finality in Philosophical thinkings. As knowledge advances and fresh avenues of thought are opened, other view, and probably sounder views than those set forth in these lectures are possible”.
We neither do nor should insist on the finality of the thoughts presented in the “Lectures”. On the other hand, as said by Allamah Iqbal in the above reference:
“Our duty is carefully to watch the progress of human thought, and to maintain an independent critical attitude towards it”.
This means that just as Dr.muhammad Iqbal viewed the Islamic and Western knowledge with due regard to the growth and development of human thought in his own age we should also keep a careful eye one the growth and development of human thought of our own times, and should organize the perceptions of today in the light of ‘Allamah Iqbal’s scientific intellectual conclusions.
[http://www.allamaiqbal.com/publications/journals/review/oct96/9.htm]
Nonetheless, the book offers some food for thought and courageously challenges the status quo. Its not the last word on the subject but agitates the minds to start thinking from a different angle for change. 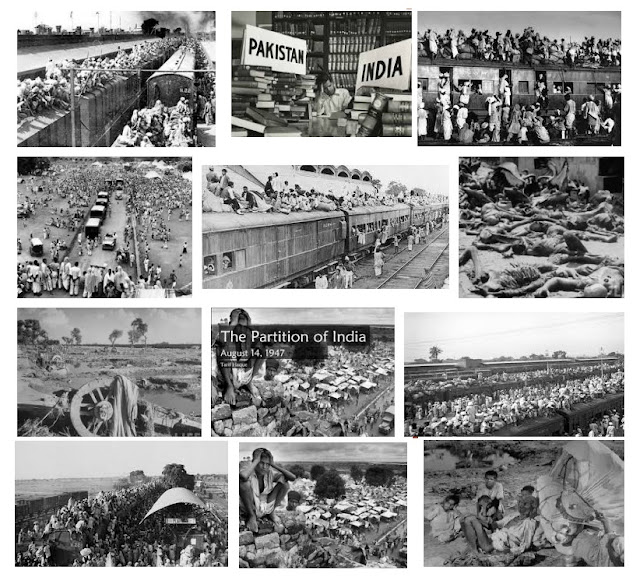